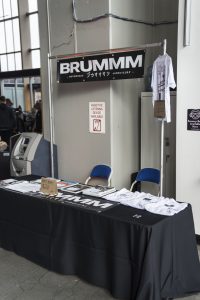 Early February the alternative motorcycle scene always meets for the “One Show” in Portland, which this year was bigger and more spectacular than ever. BRUMMM was there with a little booth to present our publication – we were sold out and even better, we made many new friends!

For 11 years, initiator and jack-of-all-trades Thor Drake and his See See Motorcycle Family has been inviting to The One Show in Portland, which is known for its liberal and hipster flair and, by the way, the highest per capita strip club density in the United States. “Keep Portland Weird” can be read on many walls, the unofficial motto of the city, because there are countless weird facts, such as the Guinness Book entry of the world’s smallest park with 0.3 sqm, events like the “World Naked Bike Run”, where thousands of naked cyclists pedal through the city protesting against oil dependency, or the “Freaky-But-True Peculiarium” – a museum for any kind of freak and trash culture. 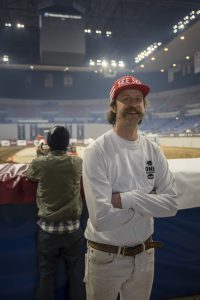 This environment both shapes and promotes the One Show. It can be seen, for example, in the multi-faceted selection of over 200 show bikes, which could not be more different: Chopper, Café, Mini, Electro, Oldtimer, Dirt, Flat Track – any creativity is possible and naturally wanted. Or bizarre things like the Karaoke Tattoo Studio, where the visitor to be tattooed can listen to karaoke performances during his session or even perform his personal world hits himself in a painfully distorted voice.

The first One Show in a small abandoned warehouse was attended by about a thousand visitors, and from year to year the locations had to be bigger. When asked what he means by the name “The One Show”, Thor explains: “When you’re working on a project or putting all your energy into a bike, it’s ‘the one and only’ thing you invest so much in that you have built and want to have ready for the show. That’s why I named the show like this to be.” The interest and the international attention to the quirky and likeable show was growing and so this time it was a special step to move to the second largest venue in the city with a not inconsiderable financial risk: The “Veterans Memorial Coliseum” in the Rose Quarter, built in 1960, is an arena with over 12,000 seats, which was not only home to the NBA team “Trail Blazers” and the Western League hockey team “Winterhawks”, but also gave the Portlanders until 1995 when the even bigger “Moda Center” opened next door, hundreds of concerts from Aretha Franklin to Led Zeppelin. Hard to believe, but the risk was worth it, the show was sold out. 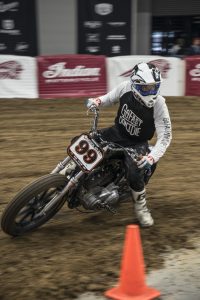 The show bikes were exhibited in the hall of the basement of the more than 18,000 sqm large area of the VMC, in the corridors and in separate rooms the 21-Helmets-exhibition with hand-painted motorcycle helmets was shown, a stage for five live bands, sponsor rooms or local oldtimer clubs with rare unique pieces could be seen. On the ground floor more than 50 photographers and artists of all disciplines presented their work, more than 70 industry and exhibitor stands showed products from all over the world – and of course there were also plenty of craft beer, coffee and food stands to be found. By the way, one of Portland’s nicknames is “Beervana”, thanks to the many creative craft beer micro-breweries located there.

There was a good and cheerful atmosphere everywhere and at all times, everyone seemed to enjoy the weekend. Some locals even thanked us exhibitors for coming to their town and making the show with all its different and international influences special. To get such unexpectedly friendly statements in such a divided country is proof of the left-liberal audience of the One Show. We don’t want to go into further personal experience reports or political conversations with local acquaintances here – it’s enough to make you cry when even hard-boiled bikers call their country totally broken or you see young homeless people living in tents in many side streets of the city.

Killer action and mood catalyst of this year’s One Show were undisputedly the Flat Track races, which were held for the first time in the same building, under one roof. In previous years, the show had been divided into two parts, much to the displeasure of the exhibitors (and the organizer) due to the racing activities taking place in Salem, about an hour’s drive south of Portland. This time the prevailing engine noise backdrop and certainly also the sweet 2-stroke oil smell heated up the atmosphere in the whole building thanks to Astro, Ossa and amigos, it was wonderful! 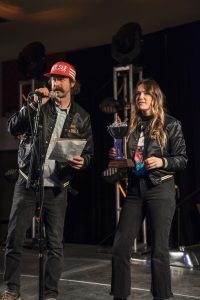 About 350 riders in 24 different amateur and professional classes provided the spectators with exciting heats in which there was a total of $10,000 in prize money to be won. So it was no wonder that the bumpy oval was a real challenge and that some of the riders had to deal with crashes. Riders with motocross experience had a clear advantage, as the damp, clayey soil from the hinterland of Portland that had been brought into the hall was pushed back together again in just a few laps after each track service, creating deep furrows in the corners. But no rider complained about the condition of the track, because much more important was the fact and joy of each individual to be able to ride again and put on a show in front of thousands of spectators and decades after the last Indoor Flat Track race at the Veterans Memorial Colliseum! 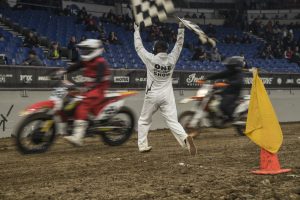 All in all, the One Show has grown into one of the most important and also biggest shows in the country. Thanks to the unconventional wealth of ideas of the initiator Thor Drake and his Weirdo team, the One Show not only provides visitors with a lot of input and entertainment, but also offers the 20 partners and sponsors of the event an ideal platform for presenting their brands and products. When I asked him if there was anything better to do next year, Thor answered euphorically: “oh yes, the karaoke tattoo room was already quite nice, but maybe we should offer more interdisciplinary concepts. What always works with cats, right?” One can be curious about the next evolutionary step of the One Show 2021.